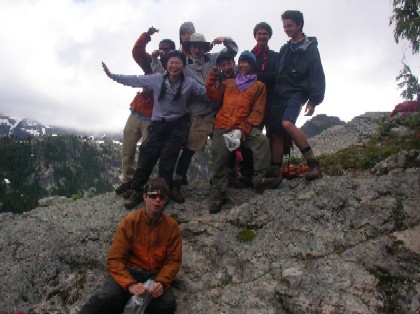 I worked three climbing courses this summer in Pacific Northwest for YBOYS. It’s self-explanatory that our students were all boys, and they were middle school or high school Seattle urban kids. Besides that, all my co-workers were guys, and therefore I was the only female on board.

YBOYS has ambitious goals and one of them is to encourage diversity. Our groups often consisted of boys from different backgrounds in terms of race, ethnicity, household income etc. I often joked that I was hired because I would add diversity to the program â€“ I am a female, I am Asian, and I speak English as a second language. My responsibility should have been just hanging out there, posing in photos for fund-raising purposes. It turned out that it was only perhaps less than 1% of my duty. All my trips were technical, mentally challenging, and sometimes frustrating. However, I enjoyed them all because they were all super fun and rewarding; I gained precious experience, I made good friends with my co-instructors and I made some difference for the boys.

I can’t recall what my answer was when Andrew Jay, the program director of YBOYS, asked me about how I feel about possibly being the only female on board. That was the last interview question and I knew that he was more or less simply curious because at my previous job I worked with all-girl courses for seven months. That question made me start thinking; other than disguising myself better when taking a natural break, not being able to talk too openly about my period, what else? I hate stereotypes and I don’t like to overgeneralize, but I couldn’t help but wonder would there be significant difference between all-boy and all-girl groups and would I have to make adjustments interacting with boys?

The last time I asked myself similar questions was before I attended college. I chose computer engineering as my major so I knew that I would be one of the few girls in class. That was a big transition for me because I was from a single-gender high school. I finally decided that I would treat all boys the same way as I treated all my high school female friends. I was so outgoing and so enthusiastic to know everybody that in my junior year many of my good male friends confessed to me that my over-passionate style of breaking ice made them wonder whether I was hitting on them. I was puzzled, did it really take them two years to realize I just wanted to be friends?

The first course was a 6-day rock climbing camp at Tieton River Rocks, I felt that I was more like a caretaker than an outdoor educator. Those middle school kids had tons of energy and enjoyed provoking each other more than rock climbing. My co-instructor Ian Farquhar and I spent more time asking them not to throw rocks or stick fight than teaching them how to move on rocks. In the morning, we often spent much time resolving conflicts before we felt safe to take them to the crags. Ian commented that some of these kids projected a mom figure onto me despite that it was the last role I wanted to possess. His not-at-all persuasive argument was that if I had a kid when I was about their age, I would have a kid their age now. Toward the end, when I started to feel some connection with some kids and successfully convinced them to step out of their comfort zone, I suddenly did not mind anymore if they considered me as a mom. A short trip like this with such a young group, it was all about planting seeds.

The second course was a 14-day rock climbing camp at Squamish BC, Canada. Ian was again the course lead and we had a third volunteer instructor, Craig McKibben, who was awarded the position of President of the Washington Trails Alliance this year. This course, we had high school kids, and many of them were either alumni who understood the structure of a typical YBOYS trip or had intention to learn all about rock climbing. We therefore were able to execute our curriculum pretty well; many of them mock led on sport routes and were guided up a multi-pitch trad route.

Kids in general respected me as a climbing instructor; however, there were some awkward moments for me because kids made borderline comments toward me which could be interpreted as affection or flirting. Sometimes I was aware that they pushed too far and I asked them to keep the conversation appropriate; however the request was usually not effective because I was fairly friendly with them and they even told me that I should not discipline them with a big smile on my face. Sometimes I was not even aware that they might have pushed too far, due to cultural and language barriers. Ian’s explanation was that I should have been prepared for this; he said â€œthey are high school kids and there is no girl around.â€ I respect Ian as a professional outdoor educator and climbing instructor but in terms of the dynamics between me and the boys, I took his words only for reference.

The third course was a 14-day mountaineering expedition in Alpine Lake Wilderness area. Salz was the course lead. The terrain was less technical than the previous two rock climbing camps, we never traveled on fifth class terrain, but the trip was in fact more intense and physically demanding. We had many long days, much off-trail travel and bushwhacking in the area was demanding. When we attempted peak ascents, the approach was usually a combination of snow travel, hopping over boulder fields, walking on screes, and traversing exposed slabs. It was not technical but the consequences were high. Kids were scared when they did fixed line travel and when we belayed them or lowered them down. We were most afraid when kids were on less technical terrain and they felt relatively safe and felt okay to mess around.

I became more authoritative during this course. There was just no time to engage in a conversation with a kid while descending a steep rock pile. I wanted them to follow specific instructions promptly because I didn’t want them to get hurt; if I happened to hurt somebody’s feelings, so be it. We could deal with that after we made it back to camp. Salz and I understand that nobody likes to be commanded all the time, and teenagers are even more rebellious. We explained to them the circumstances and most of the kids understood it and took it just fine. However, there was this one kid who had strong resistance toward authoritative figures, and he reacted to Salz and I differently. He would argue with Salz but after Salz reiterated himself, he would suck it up and complain about it covertly. With me, he would try to engage endless arguments, defending himself, and then propagate his complaints overtly among other boys. Because the requests from Salz and I were pretty much the same and the method we used to deliver them was similar, I sometimes wondered whether I got the special treatment because I was not a guy.

Some parents were surprised when they learned that their kids would be with a female instructor, but the reactions were always positive; it seemed that they were happy to see a co-ed instructor team. A father said that I was brave to spend two weeks mountaineering with boys. A female social worker was excited to see me work with YBOYS and a couple moms said â€œI have to meet youâ€ and shook my hands passionately when they picked up their sons after we returned from the backcountry. I was flattered and encouraged and at the same time I felt a little bit bad because my co-instructors worked just as hard or harder than I and they didn’t get the same kind of recognition.

Even though I have reported some observations from working with boys this summer, I still haven’t had a definite conclusion or genius discovery to share about the differences between working with boys and girls. Instead, I have realized that there are more similarities than differences when working with boys or girls. The decision I made years ago before I entered the man-dominated engineering world is still in style. I love to address people’s needs in a more generic sense; as for non-biological driven differences between males and females, I’d like to deal with them on a person-to-person basis. It is just more fun for me to not make assumptions, not think about stereotypes and to interact with people on a more personal level. Especially in a professional setting I would rather others treat me as a human being rather than a female. In order to accomplish this I should take the initiative to treat others as human beings as well.

A Summer with Boys

2 thoughts on “A Summer with Boys”