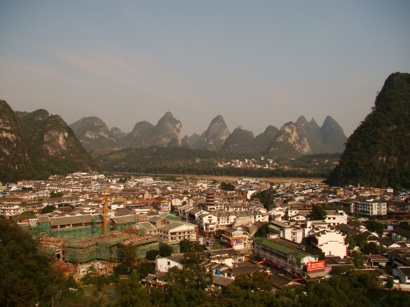 I have visited China twice and the two trips are more than a decade apart. It’s not easy to describe my feelings toward China; sometimes I feel consciously familiar but emotionally detached, while sometimes I feel the exact opposite. I have lived in the States for more than a decade too. When people asked me about where I am from, what my heritage is, I often say I am culturally Chinese but nationality-wise I am Taiwanese. I was born in the same year when â€œthe great leader,â€ Chiang Kai Shek, died. That was a symbolic year â€“ many underground currents eventually had a chance to surface, many transformations and movements were initiated or put in progress. I was growing up through many transitions which I didn’t fully understand at that time. Luckily I was so young that I wasn’t in need for a direction of life otherwise I would have been totally lost.

Chiang Kai Shek lost the civil war to Mao Zedong, and retreated to Taiwan in 1949. The failure of seeking international support to recover the lost land forced the Chiang government to take root in Taiwan; until he died, Chiang and his troops, originally recruited in various provinces in China, had never returned to China. Chiang considered his government the orthodox ruling power of China, and therefore the true representative of Chinese heritage. The proof can be found in the textbooks of my history and geography classes; however, the history after year 1949 described in textbooks and all available publications back then was subjective and partial; in geography textbooks, the structure of Chinese administrative divisions was frozen at the moment of Chiang’s retreat.

When I was in elementary school, I would get fined if I spoke a local dialect other than Mandarin Chinese, I had to put propaganda in my essays otherwise I could not get good grades, and my patriotic school teacher ripped my art work apart furiously because I drew a star on my picture (but I only drew one not five!). We wanted to fight back because we needed to save Chinese people from suffering and because the magnificent mountains and gorgeous rivers which have been developing characters and literature for five thousand years were ours. I had no idea how to interpret politics but I had a long to-visit list, Yunnan-Guizhou Plateau, Tibetan Plateau, Pamir Mountains, the Three Gorges of Yangtze River, the Five Mountains (Mount Tai, Mount Hua, Mount Song, Mount Heng in Shanxi, and Mount Heng in Hunan), the Silk Road, etc. I didn’t know when I would be able to visit those places but I couldn’t help but wish China were in fact ours.

Things started to change about the time when I went to junior high. We were no longer in martial law and the government was working on policies so that veterans could go back to mainland China to visit their relatives (or graves). Years later, I visited China for my first time with my Taiwan Compatriot Entry Permit instead of my Taiwan passport, which was and is still not considered a valid travel document by China.

The first time I visited China I toured the Silk Road â€“ from Xi’an to Urumchi, from being astonished by Terracotta Army to riding camels passing Ming Sha Shan (the singing dessert), from Lan Zhou pulled noodles to Xin Jiang kabobs… The historic assets and the scenery were impressive; the food was delicious; people were generally friendly except for the aggressive small vendors and some bookstore owners trying to educate us about â€œOne China.â€ We mimicked local accents to get away from prohibitively expensive tickets charged at touring spots (their ticket price had 3 tiers: locals, foreigners, and Taiwanese). However, it didn’t always work because people there were poor and we stood out wherever we went because we wore nicer clothes.

More than a decade later, I was preparing to visit China for my second time, and my destination was Yangshuo, a rock climbing destination. I have known this place for more than two decades because every Chinese knows this saying â€œGuilin has the best landscape of the world and Yangshuo has the best of Guilin.â€ And Yangshuo has proved this saying by proudly displaying its clear and winding Li River surrounded by continuous karst mountains and most importantly by generously letting me be on top of numerous limestone towers. I still stood out and that was not because of my clothes but because of my accompanying western friends. People were generally friendly; small vendors were not as aggressive and nobody bothered to convince me that Taiwan is part of Chinese territory.

I learned how to rock climb in the States and this fall I had a goal to climb at home. I was disappointed that I only climbed a couple routes in Long Dong, Taiwan because it rained all the time when I was there. Interestingly enough, climbing at Yangshuo made up for it. I would definitely not claim that China is ours but I can’t deny that I was feeling quite at home when I was in Yangshuo which I didn’t get the first time visiting China. China has changed much and it is still changing rapidly. I am most happy about its open policies which have shrunken the gap between Taiwan and China; I am most worried about its tourism resources. The Three Gorges were gone before I could see them and more has disappeared underneath the giant wheel of economic development. As a culturally Chinese person I feel distressed that China has lost much to the Cultural Revolution. I can’t afford for more mountains and rivers to be extracted from my beloved literature and poetry. I used to think the only thing I could do was to cross my fingers and hope. Now I am thinking of things I can do so that other kids’ wishes will come true the way mine did. I might not love China as a nationalist but I would love to see it become a great country.

In and Out China

5 thoughts on “In and Out China”