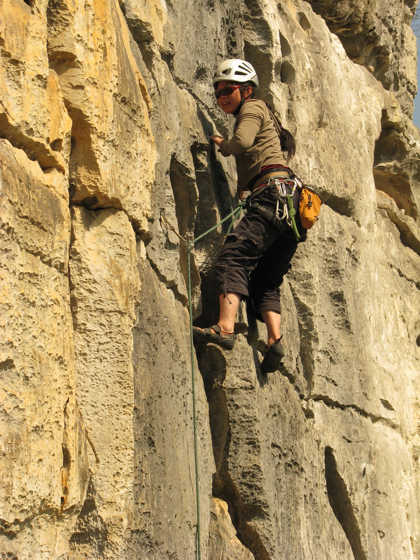 I had never considered myself a sport climber, simply because I don’t own any quickdraw. My impression about sport climbing was that it was difficult â€“ most of the routes are overhanging and have hard grades. Not for me. The initial reason I started to rock climb was because I wanted to climb mountains and therefore when it was time to climb outside, jumping right into trad climbing was an obvious choice. Trad climbing has been giving me the sense of freedom and authority which I love. I would be content to climb trad routes throughout my climbing career. Why should I bother to invest in quickdraws?

I brought my trad rack for my Asia climbing trip, planning to use it in Taiwan. The climbing area in Taiwan, Long Dong, has more than a hundred trad routes. However, we didn’t stay in Taiwan for long because the weather wasn’t cooperating. I continued to bring my rack to Yangshuo China because on summitpost is says that there are some trad routes over there. Well, I climbed only one trad route in Yangshuo. That route was worth the hassle to bring my rack overseas, but the point here is that I had to become a sport climber in Yangshuo and I now have a brand new understanding about sport climbing.

First, I got yelled at about keeping the right relative location of my foot placement and the rope. When leading, we have to make sure the rope is always in front our body, which means that the rope is always between the rock and the feet; therefore when we fall, our feet wonâ€™t trip on the rope and our body wonâ€™t turn upside-down (an upside-down fall increases the chance of head injury). If we fall, we want a clean fall. This concept is not exclusive for sport climbing but in general sport climbing starts to offer more gymnastic moves at lower grades, so if you are not on top of this concept when you start sport climbing, chances are you will surprisingly discover that your feet are sandwiched between rock and rope on many occasions.

Second, I got yelled at when I down climbed, but this is quite debatable. In trad climbing, it is widely accepted that down climbing is a useful skill to have. Even though nowadays, the protection gear is very durable, but â€œleaders do not fallâ€ is still a popular shared philosophy among leaders. Down climbing helps leaders to back off to a good rest spot and the energy level of a leader often dictates whether s/he will fall. In addition, being able to down climb and rest maximizes the chance of on-sighting a route, which many climbers consider as a mark of success and pride. I like on-sighting a route too. I remembered that at the beginning of the Yangshuo trip, on one climb, I down climbed for two-bolt length so that I could rest and contemplate on the hard move, my belayer said â€œWhy are you down climbing? Szu-ting, you are sport climbing, just â€˜take.â€™â€ I know many sport climbers â€œtakeâ€ or fall and then climb back or pull the rope to come back to the falling spot and work on the rest of the climb. They climb routes like working on projects, once they are familiar with all the moves, they would send the route and red-point it. I was not working a project and the route wasnâ€™t overhanging which would make down climbing not trivial. If I could on sight the route, why not?

Third, I entered the â€œwhipper school.â€ I donâ€™t like to fall. Before climbing in China, I could count the number of sport routes I had done. When I said â€œI donâ€™t like to fall,â€ people understood. People tend to trust bolts more than cams and nuts, and since I was and still am a moderate trad leader, most of of routes I lead (grade 5.9 and lower) donâ€™t usually have clean falls. When I climbed in Yangshuo China, the grade starts with 5.9 and unless there was some weird feature in the way, most climbs were steep or overhanging so the fall was clean and safe. â€œYou should not take, just fall!â€ â€œItâ€™s time to push your limit.â€ Pushing limits is a common reason for trad climbers to do sport routes because they can focus mostly on climbing and the fall is usually clean. I still didnâ€™t want to fall but I wanted to overcome it and push myself to experience more harmless fall so I could get used to the feeling. I entered my friend, Josie Mckeeâ€™s whipper school. She told me â€œno take, even if you yell take.â€ I did fall a couple times during my enrollment, it was not too bad but I am still not comfortable quite yet. However, most definitely I have reconsidered the value of sport climbing as a climber coming from the trad world.

The most interesting difference I found was between my mindsets towards traditional climbing and sport climbing. When I lead trad routes, I assess the route so that I can climb from one rest spot to the next rest spot; when I lead sport routes, I find I pay less attention to the natural features on rock; I connect the bolts to project my climbing path. Sometimes I end up clipping bolts from a not ideal stance. I think it will be most beneficial to replace the sport climbing mindset with traditional climbing mindset. I should ignore the bolts first to practice route finding. When I visualize a climb from the ground, I add the locations of bolts into consideration as if they are where I would set my pros as a predetermined constraint.

To conclude, my take on sport climbing is as follows:

First, sport climbing is indeed a good training method if I want to focus on climbing. Itâ€™s more than ninety percent climbing with less than ten percent of protecting and rope handling. Traditional climbing is more of a combination of even distribution of climbing and protecting.

Second, I like to climb so I of course do not want to keep sport climbing off the table. I am a climber and Iâ€™d love to proudly declare that I climb everything within my ability. Just like I say I eat everything that is eatable (this proud statement is no longer true since a couple years ago I started to be very intolerant of lactose. What a pity).

Third, projecting seems really fun. Instead of setting my mind on big alpine routes, I can start with smaller, shorter-term goals and really work out my body within a day or hours.

I am a climber; I climb everything within my ability. I love to push my limit so that I have more flexibility to choose routes.