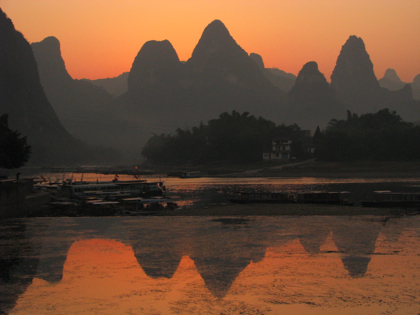 On December 11, 2008, I climbed my favorite route in Yangshuo, The Witch Woman of the Rock, in this fairly young developed area called Brave New World. The Witch Woman of the Rock is a 5-pitch climb; in the guidebook it is described as â€œa good traditional line of continuous crack climbing, well protected throughout.â€ The crack was easily spotted from a distance and the line was beautiful. Little did we know we would soon experience the most amazing view ever since we arrived in Yangshuo. Different from many other climbing areas, instead of situating itself within many other limestone towers and formations, Brave New World keeps a distance from them. When we were on top of the second pitch, this panoramic view took our breath away. The view can probably be captured by a wide angle lens but the touching emotion was beyond words.

The Witch Woman of the Rock was the last multi-pitch climb of my China trip. Towards the end of my stay, I was browsing the guidebook to seek for something interesting and this route caught my eyes. A 5.10c trad route. I knew that I was not ready to lead a .10c pitch but I brought my trad rack all the way from the States; I wanted to put them to use. The 5.10c pitch is the last pitch, and we rappel the route to descend. We can always bail or French aid the route (aka pulling gear to propel upwards).

The first pitch was a 20-meter 5.9. I followed it. The last move was quite bold and one bolt was there just to protect the follower. The second pitch was 5.10b pitch; it is not the crux pitch but I was still nervous because it was my first 5.10b trad lead. I stalled at one spot for a while, and I climbed up and climbed back down three times. I was very glad that the small ledge was there for me to replenish my energy. Finally I did an awkward chimney move and after a few scary moves, I was able to regain good footing. The chimney move was awkward because the feature soon got interrupted by a roof. The other option is to climb outside the feature and deal with a bulgy feature on the left side and eventually land the right foot high on a feature sticking out from the right. I chose to use the chimney. Because of the roof I couldnâ€™t fully extend my upper body and therefore I had to duck the whole way while slowly moving my feet up. Well somehow in a chimney, I had a sense of security. My partner chose the outside route apparently, but I was just proud that I led it.

The difficulty of the third pitch was somewhere between 5.9 and 5.10a. I had great fun following it while my leader might have thought otherwise because I could see marginal gear placement dictated by the rock quality and feature. He linked the fourth pitch, which was a mellow 5.6, and left me deal with the final 5.10c pitch.

The start of the last pitch was straight overhanging, and it also blocked the view of the rest of the climb. It looked pretty difficult already and we wished it would be the crux section. We were not sure whether the route went straight up because on the right, there was an inviting ramp for exiting. At any rate, I needed to get up higher to see the rest of the climb in order to figure out the path of the least resistance.

I put two pieces in, and managed to get higher. There were some good handholds, but they were quite polished and they were all open-hand handholds, not the best kind to grab. I hung on my left arm and placed my left foot in a hole, looking for next good gear placement. My right hand felt something and I screamed with excitement â€œI found a place to thread!â€ I was still hanging on my left arm, my left foot was still in this hole far to the left and my right foot was hanging in the air to maintain my balance. I pulled out a single length sling and started to thread the bar feature. The sling was soft and the space behind that little bar was tight, and I started to feel tired, I mumbled â€œcome on, thread; come on…â€ Right before my left arm gave up on me, enough sling was pushed out behind the bar. I soon grabbed the bar with my right hand, finished the threading with my left hand, clipped a carabiner, clipped the rope and of course yelled â€œtake!â€

I felt so much more comfortable with that thread in place because I knew that it was a bomber protection piece, probably the best piece throughout the climb so far. Since there was still much difficult overhanging climbing straight ahead, I decided that it was time to get on the ramp and take a good look at the rest of the climb. Getting through the ramp wasnâ€™t a piece of cake either, I pulled on two cams and finally was able to throw in some hand jamming to get on a ledge. I looked and pondered, the route mostly definitely went straight up. What was waiting for us if we could manage to overcome the first overhanging section was another long overhanging and flaring feature – a tiny crack inside a corner was all it could offer to accommodate gear. We didnâ€™t have many small pieces but it was not relevant for us because it looked like what we could have was bad gear placement anyway.

â€œLetâ€™s bail,â€ I said. We left a carabiner and a sling behind. I was very happy. We could have bailed right after we reached the top of the fourth pitch, but we didnâ€™t. We gave it a try, we evaluated the situation and we made a conscious decision. Going to the top matters sometimes but the process of going to the top or not matters always. I was happy I bailed because I chose to. The rappelling to the base was cool. The full moon was up before the sunset, and this route made my trip.