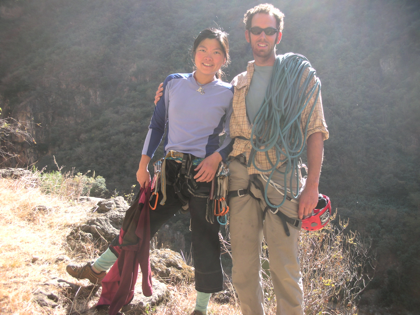 Beijing, Yangshuo, and Fumin are the three most developed cragging areas in China. Everybody knows Beijing, and climbing photos of Yangshuo have been exposed in many advertisements and photo issues in big-name climbing magazines. Where is Fumin? Why has it become so well-known in the circle of Chinese climbers? Fumin is a small town thirty kilometers northwest of Kunming, which is the capital city of Yannan province. Kunming has more than a 5.7 million population and has had the nickname â€œSpring Cityâ€ for centuries. That is to say, when itâ€™s too cold to climb anywhere else, you can always count on Fumin. Many Chinese climbers spend their Lunar New Year vacation in Fumin, because it offers year-round climbing.

The past winter, my itinerary was to explore the current climate of climbing in Kunming for my business, LittlePo Adventures, and I found that Fumin is the place where climbers will want to spend most of their time. I after all spent eight days in Fumin, projecting and simply relaxing myself under the soothing nature of the countryside. Farmers walk out of their doors before sunrise, watering their vegetables with the river water. Donkeys shuttle goods among neighborhoods. Cooking smoke coming out from chimneys in the evening contrasts the color of twilight. Peaceful and quiet at night – only a few lamps reveal their existence through the windows; stars are always loyally present. I enjoyed the climbing atmosphere in Fumin so much that I onsighted my first 10c.

I have heard that there was some climbing near Kunming when I visited Yangshuo for the first time, at the end of 2008. A few months after I returned, the first guidebook of Kunming Climbing was published. Naturally, exploring the climbing climate in Kunming area became one of the objectives in my business scouting trip. In mid November 2009, while I was hanging out at the climbing festival and building connections with local contacts in Yangshuo, the weather soon became unclimbable. For me, it was an indication to migrate west to Kunming, the spring city.

The average December temperature in Kunming is low compared to other months; however, when the sun is out, you only need a fleece jacket as the outmost layer. Early developed crags located in Stone Forest and West Hill now are off limits. Stone Forest is a national park which displays unique karst formation demanding conservation. Besides, it attracts numerous tourists daily and therefore it is really not a climberâ€™s playground. West Hill park has historical exhibitions and is a quick getaway for busy Kunming urban residents. West Hill cliff is sheer and tall. I cannot be sure whether the cliff is at least a mile long, but it certainly has the potential for hundreds of routes including many 5-pitch ones. In fact, a climbing competition was hosted here less than a decade ago; however, a reporter was hit by a fallen rock and lost his life. The authorities have ever since prohibited climbing activities.

Climbers adapted. Three areas near Kunming have been under continuous development. Anning, where is known for its hot springs, offers boulderers a complete workout cycle: hard exertion followed by a healing relaxation. The cave Xiao Moyu located in the town of Tuanjie has the most poetic name but presents the most challenging routes: many are 5.12 and up. The climbs in Fumin are near a beautiful canyon. Many of them are long and moderate (5.9-511). The current count of routes exceeds one hundred and is increasing.

I decided to really check out Fumin based on my climbing ability and preference. There were some updates and changes of local public transportation system, which happened after the guidebook was published. Fortunately, the climbing community in China is tight and highly functional. China climbers are very well connected and always welcome new friends. I phoned my just-met friend Wong Er, a Kunming-based climber who just claimed a 600-meter big wall climb at Hua Shan, and soon I arrived at Fumin without further complication. The climbing area is in fact 6 kilometers from the center of the town of Fumin, and is located within the boundary of this village called Lan Ni Tien. My partner, Mark, and I after all rented a place from a villager and had the crags all accessible within walking distance.

In Fumin, we were still climbing limestone; however, the climbing there was quite different from that in Yangshuo. In Yangshuo, harder routes are steep but more juggy. You also see more tufas in Yangshuo. In Fumin, there are many vertical routes which get a hard rating because the move is thin: the crux sequence requires grabbing on tiny handholds and standing on tiny footholds – very technical. Yangshuo has more climbing traffic, and therefore chalk marks are everywhere. In Fumin, you have the real onsights.

Among all the crags in Fumin, I like the one called Lower Red Rock the best. The guidebook shows 15 routes at Lower Red Rock but the total count was 18 in mid-Dec when I left. Two were established during the week Mark and I were climbing there, and one of them requires a couple cams in addition to quickdraws. Local climbers are still actively building up routes over there. Lower Red Rock gets sun starting from late morning. Even in winter, a base layer would suffice when you are climbing. Most of the routes there are very long, and a few of them are slightly longer than 30 meters, so tying a backup knot at the end of the rope will be wise. If you like short and powerful routes, Eye Cave will be the place to go. Right next to Eye Cave, there is also this very fun and easy 5-pitch route topping you out to a Chinese style pavilion. Over there, a great view of the whole canyon opens up in front of you. The ruins of the ancient Tea-Horse trail aspirate you to follow the footsteps of early explorers. Coming down from the pavilion, you travel through a winding trail covered by fallen bamboo leaves. You pass a cave midway, luring you for a humid and unpredictable adventure (a headlamp or flashlight is required).

I still donâ€™t consider myself a sport climber, and I personally still donâ€™t own any quickdraws. My friends think it is a mystery that I can run out on wide chimneys and off-widths but get terribly freaked out on sport routes when the bolt is still at my waist. I know I have unreasonable fear and judgement about falling. During the stay in Fumin, I was reading the book, â€œThe Rock Warriors Wayâ€ It was a fun read, and many principles the author emphasizes coincide with the concepts of martial arts. Well, not every Chinese knows martial arts, but every Chinese knows about martial arts. I couldnâ€™t agree more with the argument that a warrior has a better chance of survival if she does not waste her energy being afraid of death during a battle. I just have to evaluate the consequence of falling and if it is reasonable, I will accept it and commit to my decision – no matter if it is to keep climbing or to bail. Easy enough, especially since I had a dream about becoming a kung-fu master and kicking some bad-asses.

I had climbed with Mark for a while and trusted his belaying. I had red-pointed a few 10câ€™s both in Yangshuo and Fumin. It seemed that the time had arrived. One day, I was back at Lower Red Rock. After warming up at a the classic 5.9, Snake Skin, and another 5.10a, I told myself â€œright now or never.â€ I clipped three draws and it was the crux. All right, I was high enough not to deck and the fall was clean; â€œfocus, just focus,â€ I told myself. I took a deep breath, planned out the sequence and proceeded with the acceptance of falling. I had a thumb-index finger pinch and two-finger side pull plus a tiny foothold only my big left toe could feel the pressure. I grunted like a real martial artist and flew to the next clip. At that point, whether I would make it to the top or not became less significant. I had learned something, which is beyond a simple fact that a tiny foothold is reliable to take my whole body weight. Of course, a sweet bonus of a 10c onsight would not hurt. 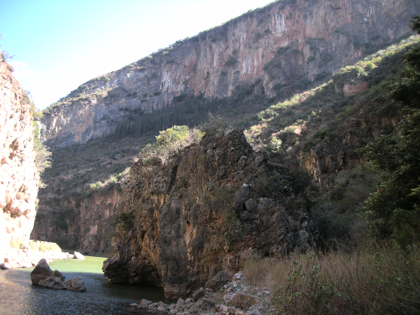 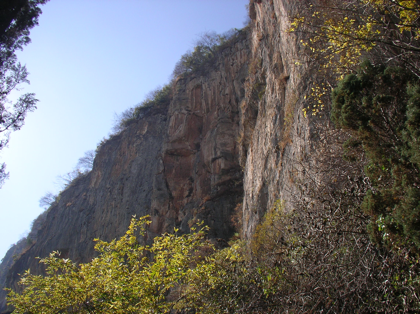 8 thoughts on “China Rock Climbs – Fumin, Under the Shadow of the Spring City”