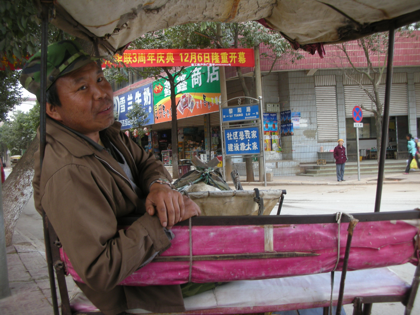 Upon returning home from an adventure, one might brag about their climbing breakthroughs, exaggerate their near-misses, and magnify the scenery and geological features along the trek. Excitement fades; however, the subtle atmosphere and appreciation developed through interactions with human lingers. This is the exact reason why the Fumin visit was the highlight of the scouting trip of LittlePo Adventures, not the 5.10c onsight, but the people will draw me back. Among whom, Lao Yangâ€™s family is the most endearing and therefore most unforgettable.

It was too cold to climb in Yangshuo when November was leaving us. Mark, my partner, and I had no hesitation to move towards Kunming, the spring city, aiming to explore the nearby climbing environment and its potential. After a few days of city touring and getting acquainted with some Kunming-based climbers, we headed to Fumin planning a week of stay to climb long and moderate routes along a beautifully carved canyon.

With little beta and the anticipation of needing some time to familiarize ourselves with a new location, we dropped our packs at a government-run hotel upon arrival. The receptionist at the front desk took our identification and looked at us skeptically. She soon phoned her supervisor asking for instructions because one of her guests was from Taiwan and the other was a US passport holder. â€œWell then, Fumin is certainly not international,â€ I whispered to Mark, â€œand does she think I donâ€™t understand Mandarin?â€

We packed our climbing gear and started to wander on the street. The guidebook said that the crag is 6 kilometers from Fumin and we should be able to get a motorcycle taxi or a horse carriage to shuttle us there and back. There was even a map in the guidebook saying â€œWait here for horsemen.â€ I am familiar with motorcycle taxis; I used one in Yangshuo and another one in Kunming. Motorcycles would get us there faster, but Mark wanted a horse carriage ride and I wanted a horse carriage ride. The decision was not negotiable.

Lao Yang was the first horseman we encountered. He carriage could easily carry four and up to six. He has a typical look of a Chinese farmer, sincere and diligent. His white horse stopped frequently for hydration at the side drainage. Mark and I were simply intrigued and amazed by the harmony consisting of many new elements. Lao Yang greeted us, â€œfrom your backpacks, I know you are climbersâ€ and he then told us with an enthusiastic voice that he has been shuttling climbers for years. Many climbers are his friends and often spend weekend nights at his place for a gourmet dinner.

We had a pleasant conversation, even though I only could understand 50-70% of the dialect he spoke. I promised him that Mark and I would dine at his place one day and I suddenly was inspired to ask him whether he had rooms for rent besides meals to sell. It was beyond a room; it was a luxurious house: a bedroom, a living room, a kitchen, a yard, and a toilet. The only thing we could possibly complain was that there was no shower on site; however, we could go to Lao Yangâ€™s residence to get a sun powered shower if we needed to. Showers are overrated anyway. Walking distance to crags, full-on kitchen, cheaper rent than the hotel. â€œWeâ€™ll take it,â€ I concluded. It turned out to be a wise decision, especially after Mark and I lost our sleep to loud karaoke by other guests in the hotel lobby.

We spent a week in Lao Yangâ€™s rental property. We are given fresh vegetables and eggs from their farm almost daily. We acquired other grocery, bakery and snack food when we visited the town of Fumin for Internet. Every morning, we slept in, made eggs and toasts, climbed the whole day in the sun, and returned home before sunset. Lao Yangâ€™s family visited us often. I couldnâ€™t understand Lao Yangâ€™s parents at all, but a friendly eye contact and a smile were more than a million words. Lao Yangâ€™s wife and his son, Yang Song, spoke very good Mandarin. She usually gave us surprise gifts, such as home-made dishes and wine, and always was on top of the game of hospitality. Yang Song took us on a local tour in a cave and showed us country roads as shortcuts and offered to swim with our climbing gear to crags across the stream. Neighbors were always curious and Lao Yang later told me that he had to go to the police post to warrant that Mark had no ill intention because the villagers were not used to have a White regular. Every evening, Mark and I either read or had a game or two of Scrabble, and it turned out that you donâ€™t have to be a native speaker to win the game! We did our laundry under starlight and constellations were easy to identify. It was always very quiet…no more karaoke to disturb our sleep.

We left for Dali in mid-December. Lao Yangâ€™s wife wanted us to stay for another couple days. She said, â€œI really consider you two my friends, why donâ€™t you stay for another couple days. I am not going to charge you for the nights. I figure that we could chat more…â€ I, too, had fun conversations with both Lao Yang and his wife. They were very interested in how I grew up in Taiwan and I wanted to learn more about what they have endured. Besides, the village was just so peaceful, Mark started to make friends with locals, and we still had routes to project. However, we were on a schedule. Lao Yangâ€™s wife then insisted we come back for the New Year party. Every New Yearâ€™s Eve, they butcher a pig which was raised for the whole year and cook a feast. Many guests would be attending. Pointing her husband, she continued, â€œitâ€™s always him who invites his random friends, this year, I am going to invite MY friends.â€ â€œWe will make our way back,â€ I said, â€œWe promise.â€

On December 31st, Mark and I showed up at the bus station in Kunming to catch a bus to Fumin. There was an unexpected long line; however, not only did we need to keep our promise, but we wanted to. I stood in line for almost two hours to get us the tickets. Besides Lunar New Year, it seems that western New Year is also the time to avoid extensive travel. In another thirty minutes, I saw Lao Yang and his horse right at the familiar wait-here spot. We had arrived there early enough to get another couple of climbs in; however, I chose to chill and helped the kitchen work. When the night fell, the first batch of guests came; an hour later, another batch of guests who belong to a climbing club in Kunming showed up. According to my estimation, there were more than sixty guests, forty-something dishes, three different kinds of soups, and of course, unlimited supply of steamed rice. Mark finally had extensive English conversations with people besides me, and he took the â€œcheersâ€ in Chinese too literally and drank up many glasses of home-brewed hot liquor. Later, his misinterpretation of Chinese taxed him big but it was obvious that he enjoyed the night.

The next morning, Lao Yangâ€™s family started cooking breakfast for us before we even woke up. Some road food was prepared for our plane rides. I ran out of ways to express my appreciation. Lao Yangâ€™s wife held both of my hands really tightly before she sent me to the horse carriage, which was waiting for us in front of the doorway. Chinese culture is not a hugging culture, and therefore the tight hand-holding revealed so much indescribable emotions; I was touched very very deeply. On the ride back to Fumin, Yang Song showed up on a bike just to accompany us to the bus station. This twelve-year old boy usually addressed me as â€œbig sisterâ€ even though I would not be offended if he called me an â€œaunty.â€ He is the pride of the Yang family and always very polite and well-behaved. He seemed to look up to me and I couldnâ€™t help but indulge in the flattering feeling.

Lao Yang requested us to visit again and bring more friends, no matter they are Chinese or not. I made sure that I had his address and phone number. Mark later commented that the days he spent in Fumin were the most authentic Chinese experience which he loved the most during his first tour in China. He loved the quietness and harmony of a self-supported rural farming culture, and was impressed by how much caring and passion could be exchanged without speaking a common language. Lao Yang said to Mark, â€œyou can bring your friends here too, and your friends are our friends. We donâ€™t know how to speak your language, but we will find ways to communicate.â€ To me, I am always very impressed by how easily farmers open up their hearts to others. In Chinese, an expression says â€œAt home, one depends on their parents; on the road, one relies on their friends.â€ While the beautiful Chinese scenery never ceases to amaze me, what lingers in my heart even long after I return home is always the kindness of people. And therefore I shall return. 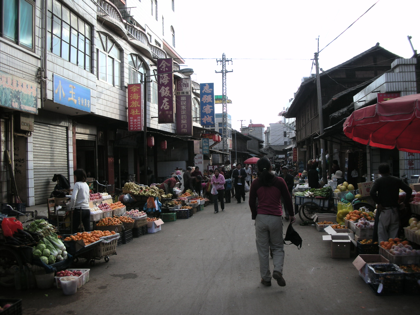 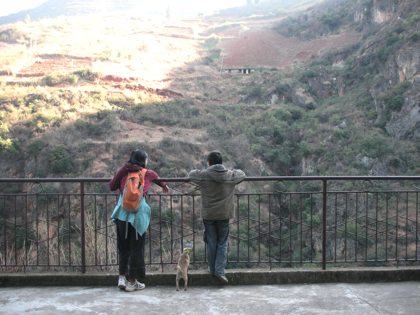 Yang Song taking us on a local tour

One thought on “China Rock Climbs – Warm and Hearty Fumin”