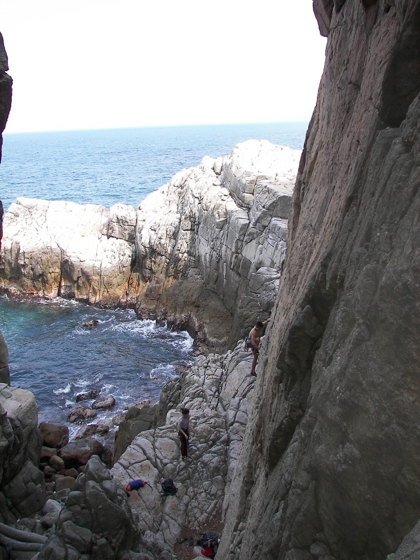 Long Dong (é¾æ´ž), which means Dragon Cave in Chinese, is located at the northeast corner of Taiwan, overlooking the Pacific. It offers roughly 500 climbing routes on hard sandstone, and it is one of the most premier sea-cliff climbing destinations in the world. Long Dong has both sport routes and traditional ones, with difficulty ranging from 5.4 to 5.13. Most of the routes in the area are single pitch, however, two-pitch classics are scattered throughout like seashells on a Caribbean beach. In August 2010, LittlePo Adventures will run our kickoff adventure, Dirtbag Taiwan – Long Dong Climbing & Cultural Experience, at this amazing location with a promotional rate.

Long Dong is very close to Taipei, the capital city of Taiwan, where I grew up. Before I knew about rock climbing, Long Dong was already famous to me. The Long Dong area combined with the northern shore is a relaxing weekend getaway for fast-paced Taipei residents. Not only is the journey one of the most scenic drives of the island, but it is an incredible geological classroom: Extremely hard sandstone caused by metamorphism and high content of quartz; Fascinating formations caused by active sea erosion, among which the ones in Yehliu (é‡ŽæŸ³) Geopark definitely should not be missed. Fishermen markets operate every single day at each harbor along the shore – the seafood is undoubtedly fresh and delicious.

When I was in college, my classmates and I loved to ride our scooters on the coastal highway, tanning in the sun, submerging in the breezes carrying the ocean smell. We stopped at locations to listen to the soothing waves, admiring the natural wonders. On our way returning to the city, we liked to take the alternative mountain roads. We either visited JinGuaShi (é‡‘ç“œçŸ³), which used to be a small mining town, to taste its featured desert snacks JiuFen (ä¹ä»½) Taro Balls or Sweet Potato Balls or we stopped by PingXi (å¹³æºª) to light a skylantern for a wish. We washed off our dirt and tiredness in hot springs near Yang Ming Mountain, and enjoyed the night view of the city before we headed back into the heart of Taipei basin. Night markets of different characteristics are open later than a bar, so we never had to worry about locating delicious and affordable food.

Years later, in another country, I learned about rock climbing, and have developed ever-lasting passion towards rock climbing. My impression and memory about Long Dong has become more vivid than ever before. I wanted to go back to climb my home rocks, and I did in November 2008. It had been raining everyday during my short visit home. I drove there, walked around to check out different crags and climbed a couple cracks in a cave. I didnâ€™t see any other climbers, but fishermen – they are the true regulars of this place, wearing rubber rain boots, fishing, rain or shine.

Dragon is an imaginary creature; however it occupies a significant spot in Chinese culture. Nobody alive has seen a live dragon, yet everybody can picture what a dragon looks like. In legends, dragons administer the affairs of water and reside in lakes and oceans. Many stories suggest the name of Long Dong but I rather believe that some dragons do reside in this dragon cave, otherwise how one can explain the long rainy season and the abrupt frisky waves which eat fishermen alive.

The climate and rainfall of northeast Taiwan is highly affected by the northeast monsoon. The northeast monsoon season lasts for 6 months roughly from October to next March and brings an abundance of rain. After that, the whole Taiwan island experiences continuous showers because of the Meiyu (Plum Rainy) season in May or June. If one plans an extensive climbing trip in Long Dong, itâ€™s better to arrange it in summer months, or in April, the sandwiched month of two rain seasons. According to the rain statistics from the Central Weather Bureau in Taiwan, both July and August had more sunny days than April the last couple years.

Another safety concern is the rogue waves (so-called crazy dog waves by locals) we mentioned earlier; however, they are easily avoided. First of all, they always happen in northeast monsoon season or when typhoons are in presence either near-by or attacking the island. Secondly, enough distance from the shore would guarantee safety.

To conclude, summer time is perfect to climb in Long Dong. It is generally hot and humid on the island but climbing near the ocean is always accompanied by cooling breezes. Blue bird days combined with vast ocean views sweep away worries and vexation. Pools of chill seawater are available for dipping. Fun activities and gourmet food are within quick reach. People are simple and hospitable. This summer, LittlePo Adventures wants to share all these with you: 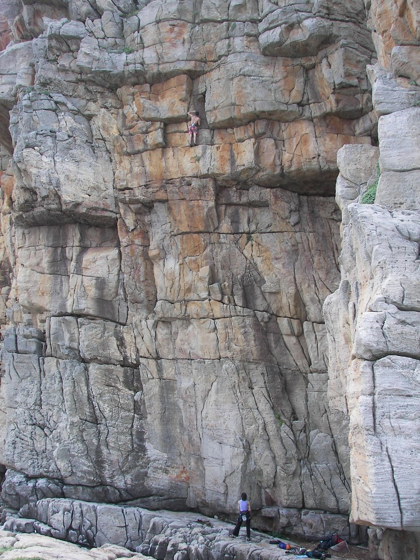 Photos are provided by Phillip Shih.

One thought on “Taiwan Rock Climbs – Long Dong, Where the Dragon Resides”