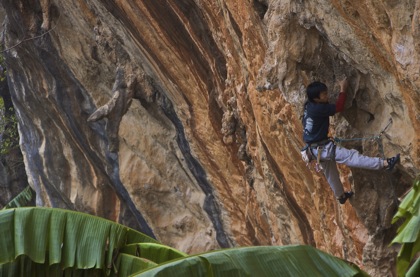 Nanning, the capital of Guangxi Autonomous Region, is an industrialized city and the commercial and administrative center of the region. It is not as well known or as representative of the region as Guilin, another big city in Guangxi. Guilin attracts numerous tourists year-round due to its unique historical position and beautiful karst landscape. As an adventurer and a climber, I would have never considered Nanning as a destination; however, a series of events drew me to Nanning twice and led me to amazing climbs well hidden behind the monotone of skyscrapers.

After saying farewell to the gourmet New Year feast at Lao Yangâ€™s residence, I arrived at Kunming airport in the afternoon of Jan 2nd 2010, planning to catch a flight to Guilin. I would have arrived at Guilin with plenty of time to spare because my friend, Dave Anderson, who is a veteran NOLS instructor, would not fly in until the next morning. Betting my relaxation on Chinese airlines was soon proven an unwise decision: an unexpected cancellation of the flight forced me to change course. Driven by a simple-minded goal of being on time, I made a quick decision to take a later flight to Nanning. From there, I would have to make sure I catch the last red-eye train to Guilin, which was a seven-hour ride.

Nanning and Guilin are the two biggest cities in Guangxi Autonomous Region. Nanning is the capital and the commercial and administrative center; Guilin enjoys popularity due to its unique historical position and karst landscape. Needlessly to say, both cities have millions of dwellings. Nanning airport is located in the suburb. On the bus ride to the train station, modern architectures and skyscrapers gave me the impression that Nanning is a highly developed and industrialized city. The train station was crowded even when it was approaching midnight. The area near the train station seemed like the older part of the town where one usually discovers traces of urban development. I didnâ€™t have much time, but I gazed into the streets, trying to register as much data as I could. Little did I know, I would come back to Nanning within a few days and the reason was to rock climb.

January is not the best season to climb in Yangshuo, especially this January. Locals told me that this year was an odd year, and they had more cold fronts than the record year. Dave and I managed to climb a couple days; however, we were not too die-hard to climb in down jackets, not to mention that two popular south facing crags were having access issues. We brainstormed alternative climbing destinations; I didnâ€™t want to head back to Fumin, it was raining in Long Dong Taiwan, and there were not enough routes documented in either Hainan or Fujian. Finally we realized the best escape was just around the corner: Nanning. It is warm in Nanning year-round due to its subtropical climate, and there were about a hundred limestone sport routes. According to the guidebook, most of the crags are overhanging and the routes can be climbed rain or shine.

It is very convenient to commute between Yangshuo and Nanning. From Yangshuo main bus station, there are two buses going to Nanning daily. Otherwise, one can always head to Guilin first (every 15 minutes, there is a bus to Guilin) and catch one of the frequent buses or trains to Nanning. The travel time ranges from 3.5 hours to 7 hours depending on the choice of transportation and traffic. Lodging in Nanning is slightly more expensive than that in Yangshuo; however, the price does not inflate as much as that in Yangshuo during the tourist season.

One short bus ride takes you from Nanning to where the crags are located. The crags are either next to or close to a small village called Defu; however, the village is so small that most bus drivers do not know what and where it is. If that is the case, just get off at the Yilingyan Scenic Spot and walk back towards Nanning. In about three quarters of a mile, there is the first crag.

Thanks to a well-connected Chinese climbing community, I be-friended with a Nanning based climber, Zhao Si, via my friend Zhang Yong, who operates a climbing school in Yangshuo. With amazing cell coverage in rural areas, we were able to phone Zhao and with his help locate and climb at a couple crags on short routes. The next day, we met Zhao in person. He and his friend drove us to the area again and introduced us the Red Cliff, the crag of which the locals are most proud of. It was a colorful cliff. Layers of red-toned colors together with the base color of limestone presented an orderly but natural and creative art. It reminded me the impressive view of foliage during my very first outdoor climb in the Gunks in Oct 2006.

At the base of the climb, there were many banana trees. The contrast of the dazzling green and the profound red stroke me; it was just incredible. Having noticed my reaction, Zhao said, â€œYou should come back here when it is spring time. The green is greener and the red is redder. Flowers of all these fruit trees are in blossom. You will feel that you are in a picture.â€ I looked around and I knew that Zhao was not exaggerating. He is one of the route setters in Nanning; he told me that the development of Nanning crags started earlier than that in Yangshuo; however, Yangshuo soon attracted numerous developers from around the world because it possesses a friendly small-town atmosphere and many easily accessible crags are in close proximity. Nanningâ€™s development has come to a standstill and now it is a contingency plan when it is too cold in Yangshuo.

Ironically, I like the fact that Nanning is only in possession of a few climbing gems. After a few evening strolls in Nanning, both Dave and I started to tap into the pulse of this city. The city had much energy. In a city park, different groups of people were practicing different styles of dance. Chinese chess matches were at each street corner. Regional snack food merged to a three-block night market. Having grown up in a big city, Taipei Taiwan, I believe that a city is a place to look for diversity and inspiration. A city resident is entitled to be exposed to unlimited possibilities. Nanning does its job just fine. 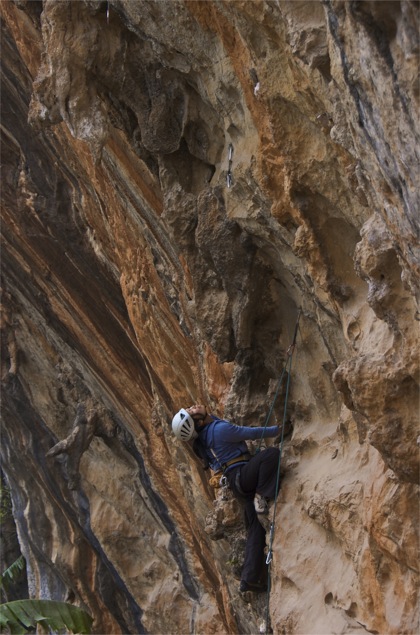 3 thoughts on “China Rock Climbs – Nanning, A Treasure Hunt of Rubies and Emeralds”