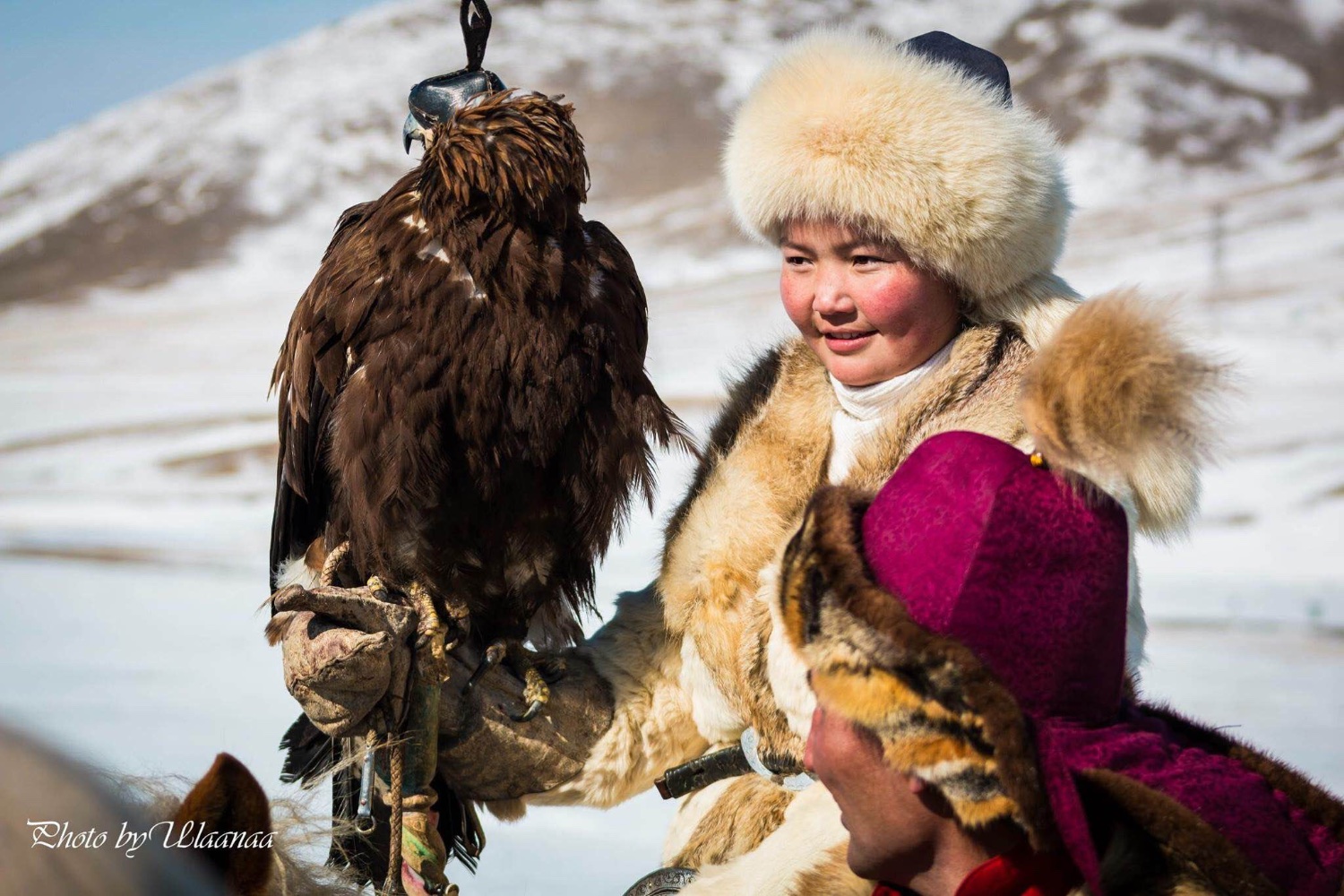 One of the oldest and most spectacular customs of Mongolia’s Kazakh people, passed down from generation to generation, is hunting with specially trained eagles. This tradition displays the pride of the Kazakhs and their skills as hunters. The annual festival brings together the best eagle hunters of Mongolia. The festival is held in the extreme western part of Mongolia, at the heart of the majestic Altai Mountains, an area featuring rivers, glaciers and the beautiful landscapes in Mongolia’s Bayan-Ulgii Province. 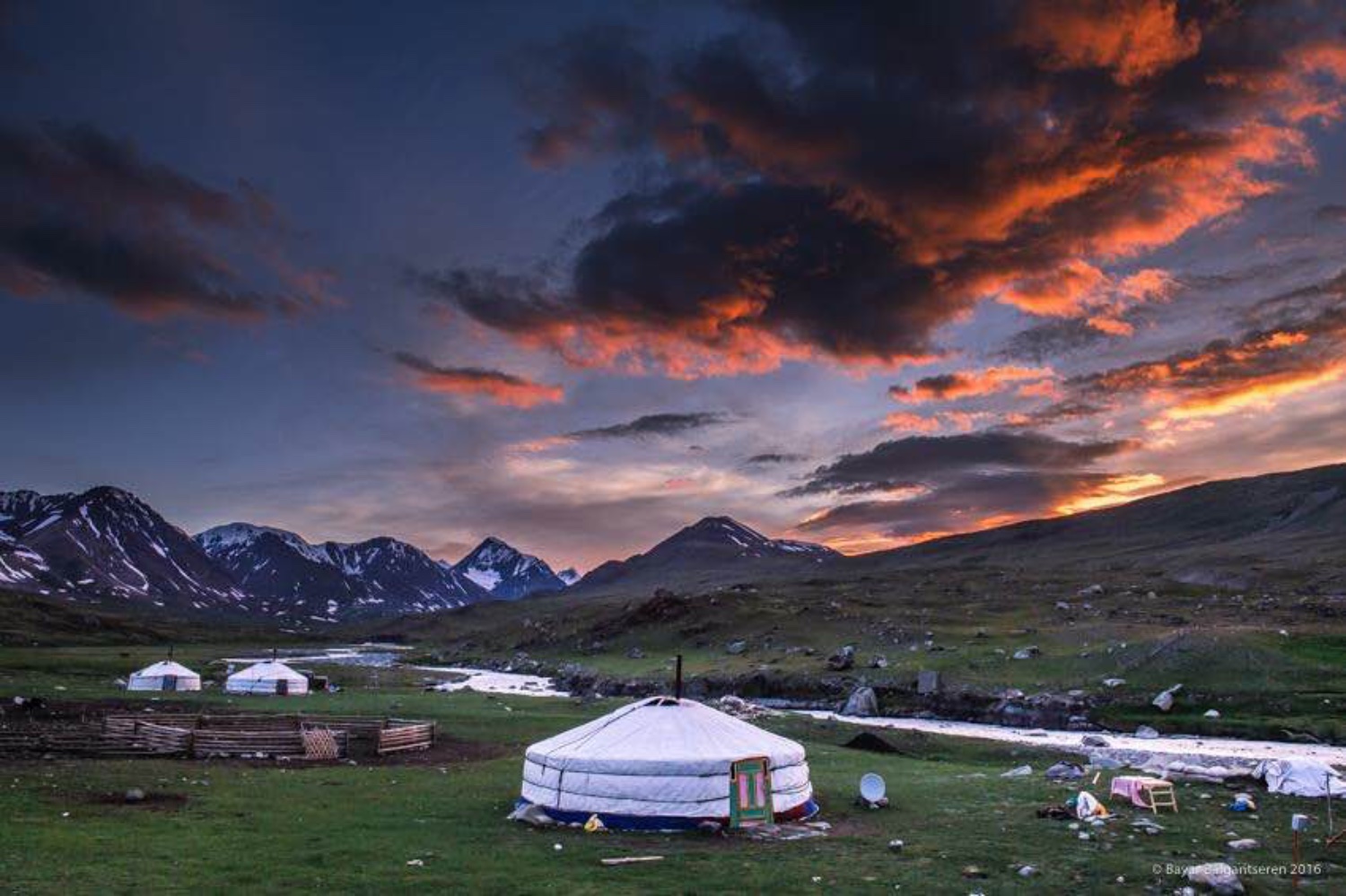 Welcome to Ulaanbaatar! After collecting your bags at Chinggis Khaan International Airport, you will be met and transferred to the Bayangol Hotel, one of the best hotels in the city. You will pass a large suburban area, where traditional nomadic felt tents are located next to Western-style family houses on your way to the capital city of Ulaanbaatar (UB). This energetic city of more than one million people is home to nearly half of the Mongolian population. After lunch we will visit the Fine Arts Museum, which showcases a noteworthy collection of religious art from pre-history to the early 20th century such as metal sculptures, scroll paintings, and papier-mâché masks. We will also visit the National Museum of Mongolia and observe its diverse collection of Buddhist statues and traditional ethnic costumes. In the evening, a special welcoming dinner will be prepared for you

After breakfast we will visit the spectacular 19th-century Gandan Monastery, one of the few Buddhist structures that survived destruction by the Communist government in the 1930s. The bejeweled 20-ton Migjid Janraisig statue, a replica of the original copper statue erected in 1911, stands as the monastery’s prime attraction. Then we will drive to Hustai National Park, which is Mongolia’s premier natural preserve and a UNESCO Biosphere Reserve. From there we will embark on a search for the world’s last surviving subspecies of the wild horse (Eques Ferus), known as Przewalski’s horse or takhi here. Poaching and livestock overgrazing decimated once large herds and after sightings ceased in the 1960s, conservationists pronounced the takhi extinct in the wild. Since then conservation efforts have been successful at re-introducing them into the wild. 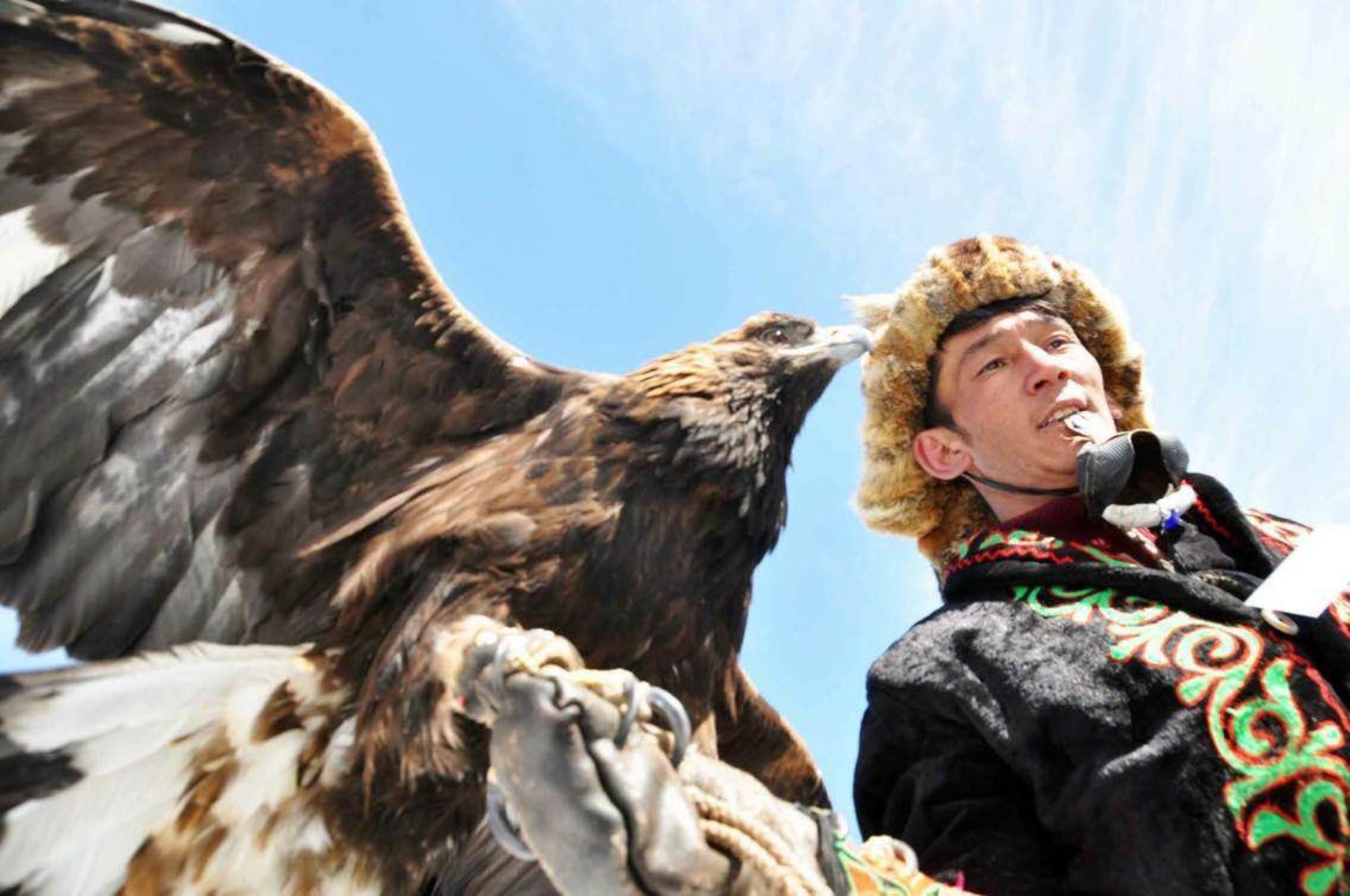 We will drive back to UB and visit the rare and valuable book museum in the National Library of Mongolia. The National Library of Mongolia is the largest library in the country; there are around 3 million books and publications in the Library’s collection, 1 million of which are rare and valuable books, sutras and manuscripts, including the world’s only copies of many Buddhist texts. The collection includes historical materials in Mongolian, Manchu, Tibetan, and Chinese. In the afternoon there will be time for art and cashmere shopping before the evening program of a folklore show.

Today we’ll fly to Bayan-Ulgii (Tue, Thu and Sat only) then drive to Tolbo Lake or Sagsai. We will camp among Kazakh families, of which many are eagle hunters. We will experience more of this culture as a guest in their gers and listen to their myths, stories and songs, and taste their food. We will stay overnight in a tented camp.

Today we will follow Kazakhs as they hunt. We will meet the hunters, their families and their birds, and learn about the skills involved in the capture, training and use of eagles as hunters. We will drive to Ulgii in the afternoon and stay overnight in a local hotel 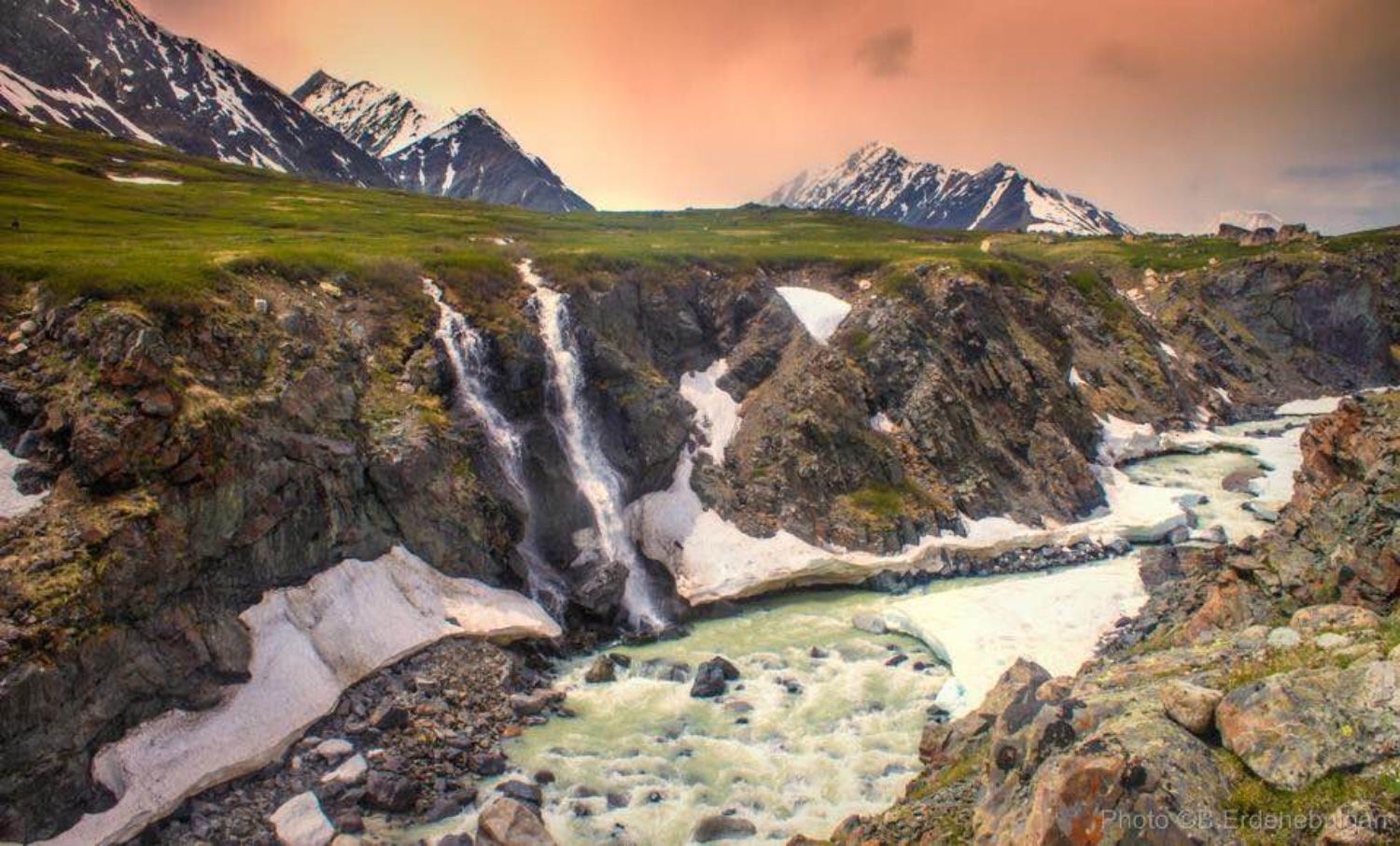 Today we will witness a parade of 250 eagle hunters on horseback with their eagles. Each hunter will demonstrate how well his bird responds to his verbal commands. The eagles are placed on a cliff nearby and are called from below by the owners. In the afternoon there will be a race of amblers – an exciting scene. In the evening we will take in a Kazakh concert consisting of traditional songs and dances.

We will watch Golden eagles display their speed and agility. Each bird will attempt to land as soon as possible onto a fox skin dragged by a horse. We will them have the opportunity to participate in some exciting traditional Kazakh games, such as ‘aitis,’ a poetry duel, ‘kyzkuar,’ a dating game played on horseback and ‘kokpar,’ a wild game played on horseback with a goatskin. In the evening you will be invited to a Kazakh feast.

Today we drive to Mt. Tsambagarav(4208m), which is one of the most beautiful mountains in the Altai, via Tolbo lake. It is permanently snowcapped and sits on the border of two provinces, Bayan-Ulgii and Hovd. The National Park was established in 2000 and has a notable population of snow leopards. 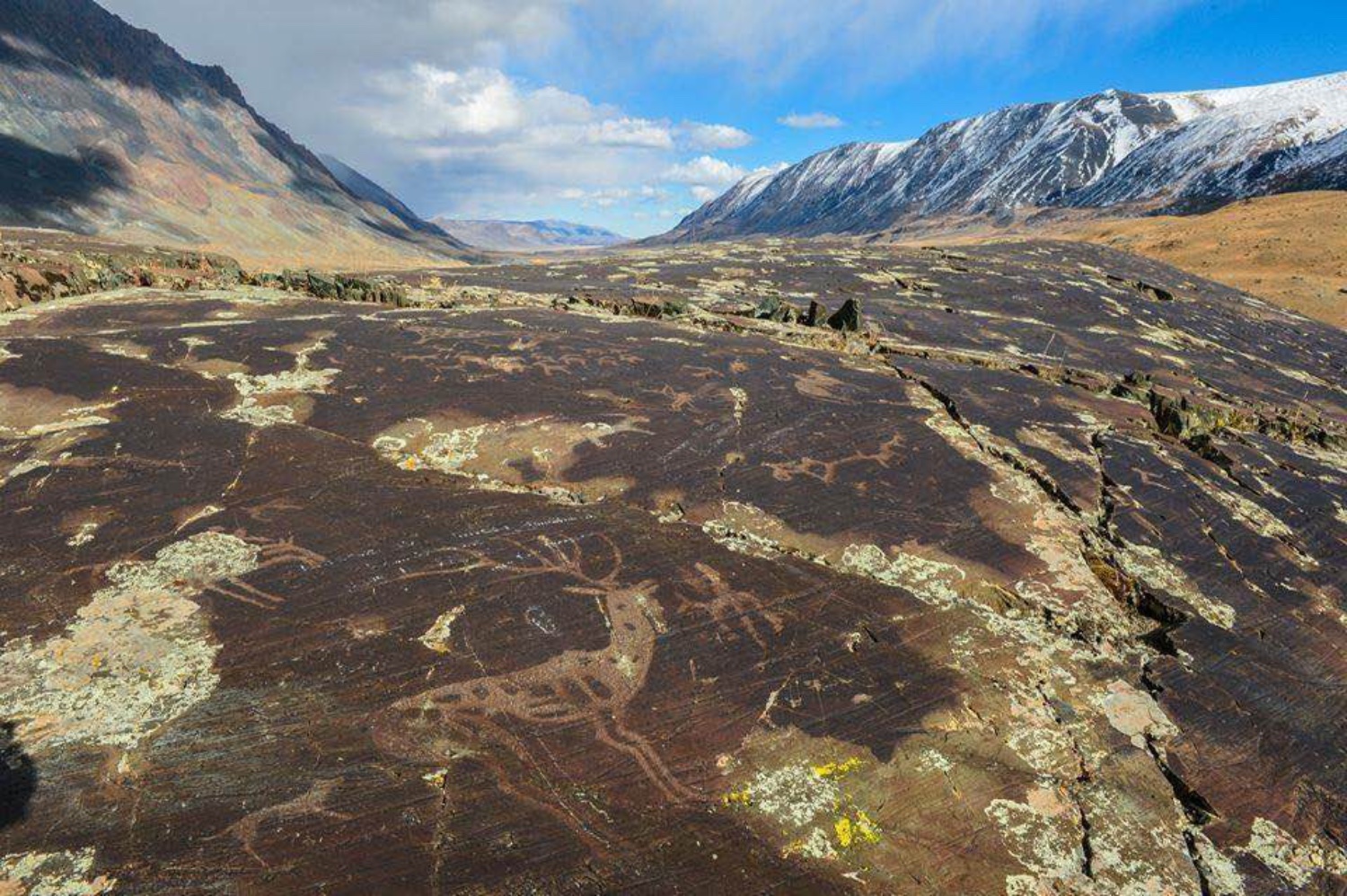 After early breakfast we’ll head out to the “Blue Caves” in Mankhan Sum. After a drive of around 220km, we will reach a rocky valley with a small cave entrance situated several meters above the valley bottom. The main reason to visit Tsenkheriin Agui or the Blue Cave is to see the ancient cave paintings, which date back somewhere between 15000 – 40000 years. With the aid of a strong light, we will be able to find pictures of wild goats, camels, an ostrich, and other larger animals.

After exploring the caves we’ll drive back to Khovd province. The Khovd is one of Mongolia’s most culturally diverse aimags, with a Khalkh, Khoton, Kazakh, Uriankhai, Zakhchin, Myangad, Oold and Torguud peoples. After arrival in Khovd city, we will be able to see some local sites, including a local museum the Sangiin Kherem Manchu Ruins, a local Buddhist temple, and a local market. 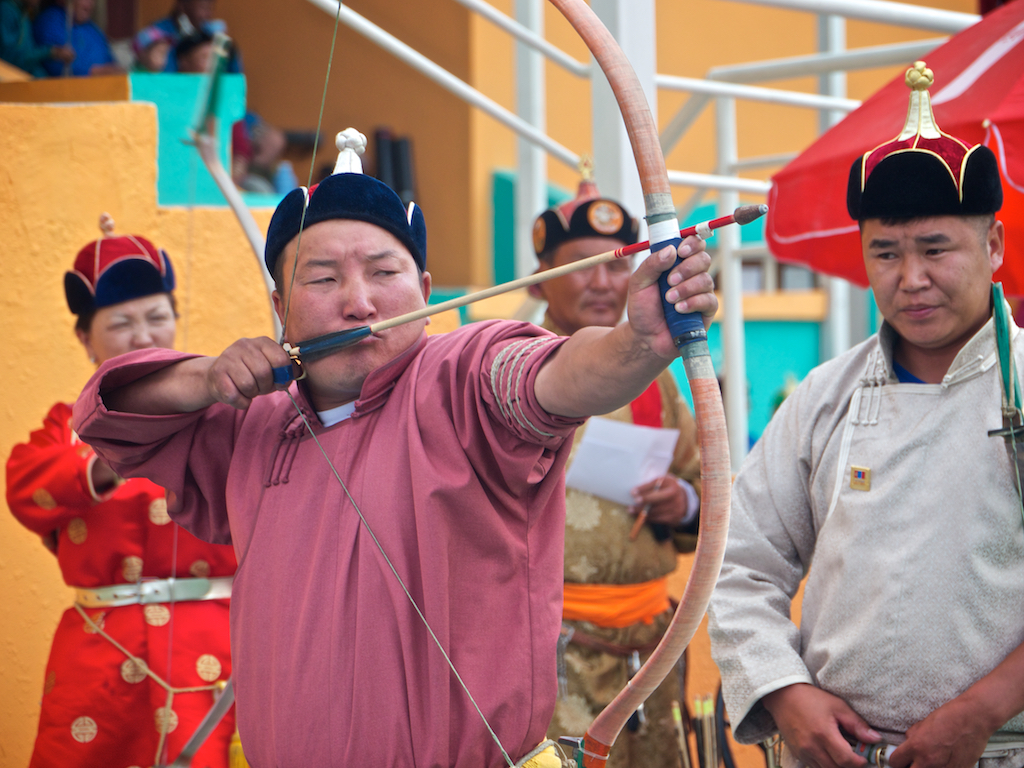 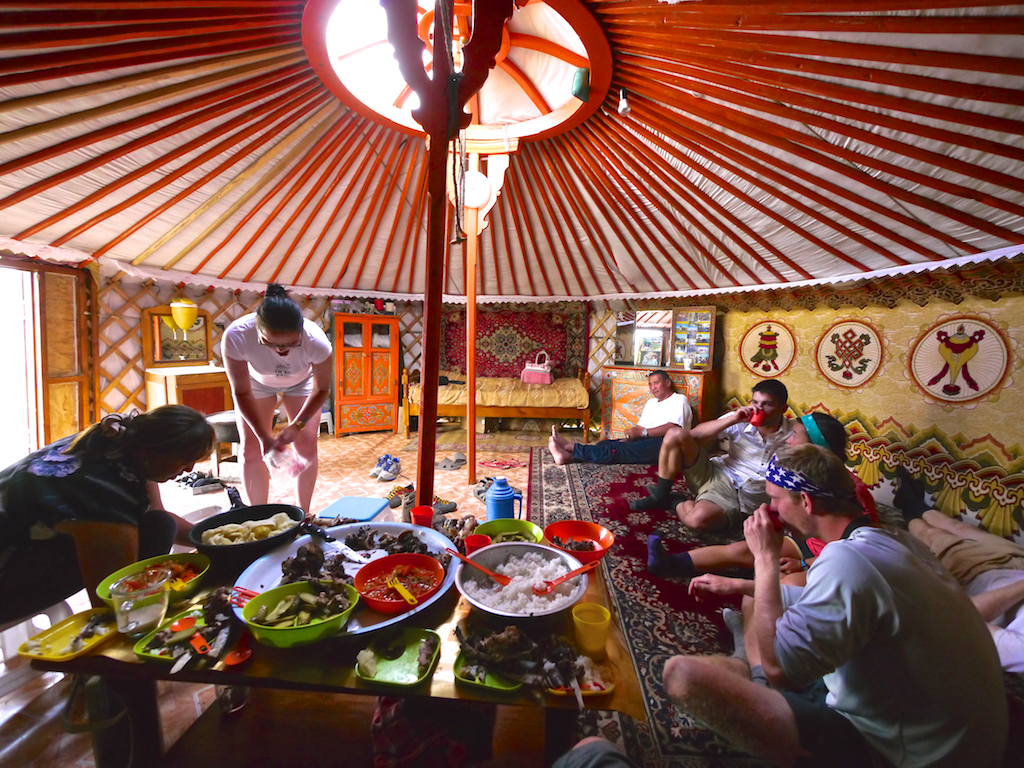 We will drive to the local airport for the return flight to Ulaanbaatar and then directly overland transfer to one of Trip Advisor’s favorite ger camps: the Tuul Riverside Lodge in the Khentii Mountains. Situated within an hour’s drive east of Mongolia’s bustling capital Ulaanbaatar, the Tuul Riverside Lodge is a small, fully sustainable, traditional Mongolian ger camp surrounded by a sea of grass and rolling hills, which stretch down to the nearby River Tuul and beyond. At the lodge, we will learn how to make the traditional Mongolian dish buuz, which we will enjoy for lunch. After lunch, we will take a walk or try some Mongolian archery. Legendary for their prowess with the bow, Mongols perfected this ancient practice with bows constructed from wood, animal sinew, bone, and glue made from fish bladders in a process that could take up to a year. A stone inscription dating from the 13th century claims that one of Genghis Khan’s generals hit a target from a distance of 1/3 of a mile. We will enjoy a wonderful traditional meal by candlelight in the evening!

After breakfast, we will saddle up our horses and ride towards mountains and cross the mighty Tuul River. On the way we will stop and visit the a herder’s family and learn more about Mongolian traditional lifestyle. After lunch, we will enjoy some free time. Do some botanical hiking around the camp area, try some more Mongolian archery …or simply curl up with a good book, and enjoy the view! Tonight we dine on traditional Mongolian barbecue then watch a shaman performance around the lodge’s campfire. 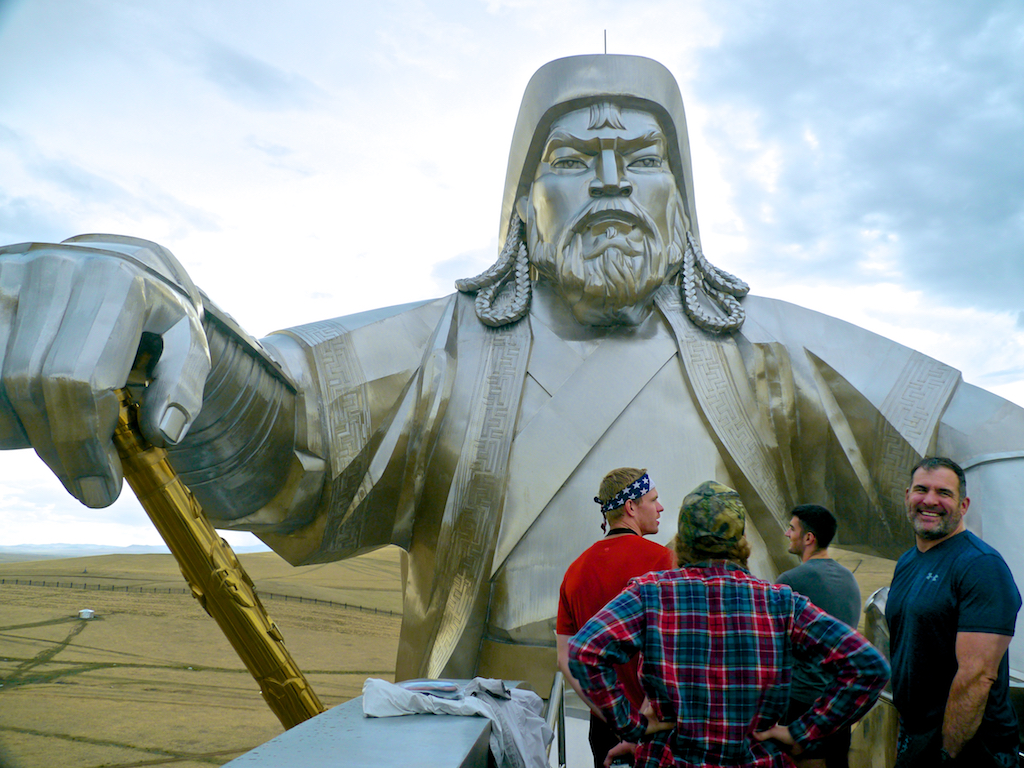 Today we will go on a day trip to Tsonjin Boldog. Genghis Khan, the legendary horseman who conquered half the known world in the 13th century, has returned to the steppes of Mongolia.. About an hour’s drive from Ulaanbaatar, Mongolia’s capital, the Khan first appears on the horizon as a twinkling speck, rising on the plains like a shimmering mirage. As we approach, he will take our breath away: a 131-foot-tall giant on horseback, wrapped in 250 tons of gleaming stainless steel. Visitors can even take an elevator and emerge from between his legs to gaze at the lush Mongolian steppe from a deck atop his steed’s head. In the afternoon there will be time for art and cashmere shopping before the evening program of a folklore show, followed by a farewell dinner at a local restaurant.

After an early breakfast we will transfer to the Chinggis Khaan international airport for your departure home. Thank you for travelling with us, and we hope you enjoy your time in